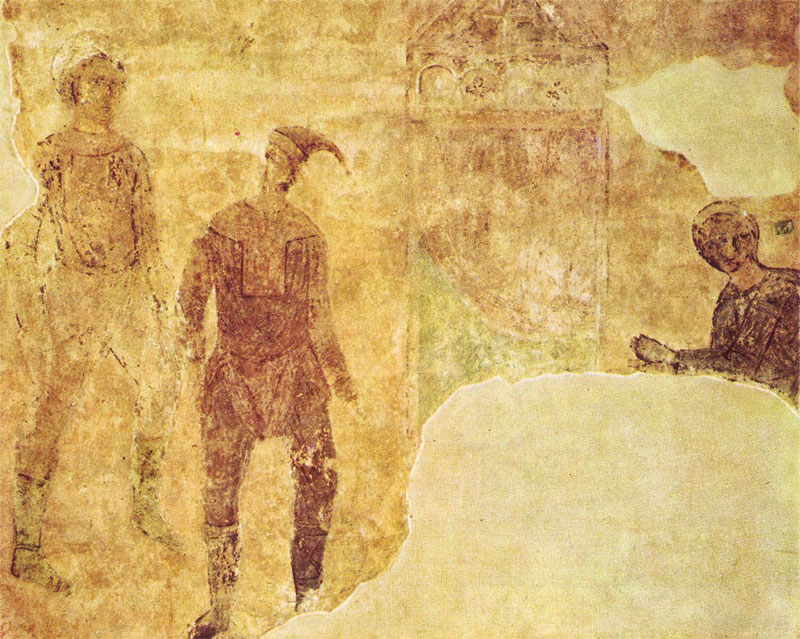 Beginning of the tenth century to the middle of the eleventh century marks the first period in the tradition of the Ukrainian liturgical singing. In this period, however, we deal less with the actual facts and more with the questions pertaining to the tradition of liturgical singing. Unfortunately we have no documents or written monuments that survived from this time span. This leaves us with nothing more than hypothesis based on a few scarce facts we have from this period.

It is worth taking a look at general historical overview specifically pertaining to Christianity among Eastern Slavs. Taking a look at the general musical influences (even folklore) of the time, will help us better understand the musical sensibilities of newly Baptized Slavs, which in turn, might have influenced the development of Ukrainian Liturgical singing.

We can look at Ukrainian liturgical singing by going back to the period before the Baptism of Rus’ in 988 A.D. by Vladimir the Great. During that time non of the reigning princes were Christians, with the exception of princess Olha, the grandmother of prince Volodymyr the Great. Nevertheless, there were a number of merchants among Georgians, Greeks, and Armenians who traveled and spend a significant amount of time in Kyiv, present day Ukraine. There were also Christians who traveled to Kyiv from Western European lands. In Kyivan Rus’ Christianity was neither forbidden nor persecuted. The government simply paid no attention to it. This is the time during which the foundation was laid for the reception of Christian faith, worship and liturgical singing. We also know that as early as 882 A.D. Kyiv was ruled by Askold and Dir, presumably two brothers, who were Christians. They were murdered by Oleg the Seer circa 879-912 who conquered Kyiv and used the elaborate scheme to kill the brothers. Some historians suggest that such coup d’état in Kyiv was as a result of Askold accepting Christianity. The chronicle suggests that Askold and Dir were buried in different places. Some even suggest that there was only one person. Askold’s name was Dir before his baptism.

Unfortunately no written monuments from this early period on liturgical music has been discovered. This, however, does not mean that such monuments did not exist. Their absence may be explained by constant and devastating invasions encountered by Eastern Slavs. Another possible explanation was that liturgical music would constantly be evolving, thus the earlier manuscript would become obsolete and neglected. The liturgical music would become more systematized towards the end of the 11th century, thus, old manuscripts could have been deliberately destroyed. And yet another supposition is that the missionaries, evangelizing in Kyivan Rus’, would use manuscripts written on inexpensive materials that deteriorated over time.

A well established fact is that the chronicles we revised under the rule of Volodymyr Monomakh according to the guidelines and with the approval of the Greek hierarchy in Rus’. This was done with the intention to protect the interests of the Byzantines. It is supposed that anything in the chronicles that was not according to the tradition of the Byzantines was treated as unacceptable. The materials that were served as primary sources were destroyed as to obliterate any influences from the local ecclesiastical culture prior to the establishment of Greek hierarchy under the jurisdiction of Constantinople Patriarchate.

A few decades after the Great Schism (1054 A.D.) there were efforts to suppress or destroy any evidence of previous ties between Orthodox but non Eastern Byzantine nations, particularly those of Western Europe. Some of the mosaics of one of the oldest monuments of Kyivan Rus’ were discovered and spiked a great interest. These are the figures of buffoons with musical instruments (obviously not a Byzantine tradition, yet depicted on the walls in frescos of Sophia Kyivska). There is a musician with a bow instrument sifting on a roadside stone, flutist and other musicians on lutes and psalteries. The walls of the southern tower depict the only picture of the organ known in Old Rus’. One can easily discern the organist playing the organ, and two fellow pimping air into the pipes.

Organ in the picture Buffoons Reconstructed by S. Vysotsky and I. Totskaya

View all posts by Yevhen →